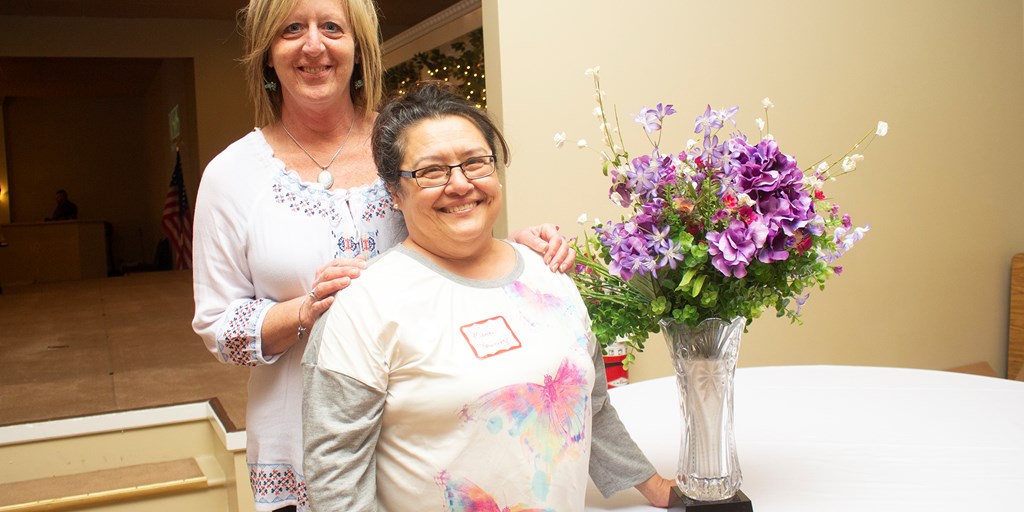 “People will ask, ‘Forty-four years—aren’t you tired? Aren’t you bored?’”

She says that would be impossible.

“There is no getting bored. Things are always different.”

Maria began working for Great Lakes Community Action Partnership (GLCAP) in March 1977, when the agency was still WSOS Community Action Commission. She started as a typist in the clerical pool, part of a team that typed forms, narratives for programs, and any other document that needed to be printed for the agency. Typists in the clerical pool would take their work from a stack of assignments. Once you chose your assignment, there was no putting it back or taking another until it was complete, Maria said.

But, shortly after starting in the clerical pool, the receptionist position opened. Maria thought she would be right for the job, and so she went for it.

“I thought, ‘I’m a non-stop chatterbox—I could do that,’” Maria said.

She got the job, and it is what Maria has done for WSOS/GLCAP ever since. It’s been an ideal position for someone who speaks both English and Spanish, and who is comfortable working with the public.

Maria has worked in the tight spaces of the front waiting room in the agency’s former Central Office location on Front Street in Fremont (both before and after the building had air conditioning). Now Maria is ending her career in the roomier entrance of the agency’s new headquarters a few blocks down, where much of GLCAP’s staff relocated three years ago. Along with moving locations, Maria has moved from using a manual typewriter to an electric to a desktop computer, and from duplicating items on blue-inked mimeograph machines to full-color copiers. But, whatever keyboard she is using or room she is in, the most constant source of change for Maria comes each time she answers the phone or greets someone walking in the door.

“Everyone’s situation is unique,” she said.

Oftentimes, those who call are distressed because their electric is going to be shut off, or they are facing eviction, or they have been days or weeks or longer without a home. Some try to stay positive. Some are in tears. And some are angry or frustrated because of the circumstances they are in.

“The first few months were difficult,” Maria recalled. “I had to get past those attitudes, or I wouldn’t have lasted more than a few weeks. But you realize that everyone is human, and you handle every situation with kindness and courtesy.”

That approach is part of her upbringing, Maria said.

“We’ve always been a close-knit family and we’ve always pitched in to help,” she said. “Had I not experienced that since childhood, I don’t know if I would be the same person.”

Once retired, Maria plans on staying active in her faith as a Jehovah’s Witness, and enjoying more time with her family, her seven siblings and their families, and her father.

Hopefully, she has time to relax, as Maria has stayed updated on every new service, policy, and other changes that the agency has gone through in the past 44 years. Most of the people who contact GLCAP and speak with Maria will be forwarded onward to another department for assistance—housing, utilities, or whatever other service a person needs—and so keeping up with changes was part of the job. About 150-200 staff worked at the agency when Maria started. Most of the agency’s programs were located in Wood, Sandusky, Ottawa, and Seneca County—the core counties that formed the original WSOS name. There are now nearly 500 staff members at GLCAP. Some of them are even in other states, as the programs have extended far beyond those four counties.

Maria remembers earlier in her year when she fielded calls from partner organizations like the Ohio Association of Community Action Agencies in the state capitol of Columbus, or funders like the Office of Head Start headquartered two states over in Chicago, Ill. She said these calls were nice because it made her feel like the organization wasn’t alone in doing work to help communities, and that she was part of a larger picture.

Now, after more than four decades as the voice of the agency, it may be said that Maria has been the one who has made people from distant cities, counties, and states feel more connected to something bigger that can help. As Maria says:

“My key for the past forty-four years is that everybody is your neighbor.”

To enable comments sign up for a Disqus account and enter your Disqus shortname in the Articulate node settings.