Glenn Baker, president of the Sandusky County Senior Citizens Organization, was presented with the Marine of the Year award for Sandusky, Seneca and Wood County by the Marine Corps League, Department of Ohio.

Members of PFC Russell Mook #279 Marine Detachment in Fremont recommended Baker—who has served as commandant for the detachment for more than ten years—for the award. The detachment coordinates local Toys for Tots drives in Sandusky and Seneca counties, gives commendations to Boy Scouts who have earned the rank of Eagle Scout, and conducts honor guards during funerals for local marines. 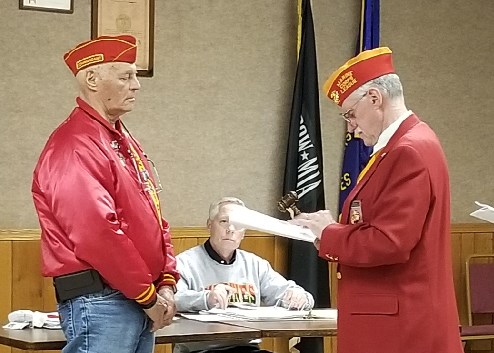 Glenn Baker is presented with a Marine of the Year Award
by Marine Corps League, Department of Ohio Commandant
John Cook at Fremont VFW Post 2947.

“It’s part of our creed. ‘Semper fidelis’ is the creed of the Marine Corps,” Glenn says. “We’re always faithful to all marines. We try to do the job of honoring them when they pass on.”

Great Lakes Community Action Partnership Senior Services Director Robin Richter, who has worked with Glenn on past senior levy campaigns, said she was glad to hear of Glenn’s award.

“We are proud to see that Glenn is being recognized,” Richter said “He is truly deserving.”

“When I got out of high school, it wasn’t a very prosperous time,” Glenn said. “A lot of my school mates went into the services or went in to college, because there wasn’t a lot of work available.”

Glenn chose to join the Marines.

“I always liked the marines and what they stood for,” he said.

At that time, Glenn went to boot camp at Camp Pendleton in San Diego, where he was also stationed. The era in which Glenn served was pre-Vietnam, but was during a period of increasing Cold War tension between the United States and the Soviet Union that peaked with the Cuban Missile Crisis in October 1962. Had the crisis not ended peacefully, Glenn would have been one of thousands of troops to invade Cuba.

“We had a lot going on during the Cold War that we weren’t allowed to talk about until 15 years after,” Glenn said.  “We were stationed in California and they moved us all to New Orleans. They were not only going to stop the missiles; they were going to invade.”

Along with his role as detachment commandant, Glenn is active in supporting Sandusky County seniors. In addition to his role as senior center president, Glenn has been part of a committee to oversee two successful senior levy campaigns in Sandusky County, the most recent being the passage of a .5 mill levy in 2015. The levy has supported new initiatives for GLCAP Senior Services, including the Senior Helping Hands and Senior Express programs.

More recently, Glenn was part of a promotional campaign for a levy to support Mental Health and Recovery Services Board in Sandusky County. The levy successfully passed on May 7.

“I feel for our students, and the opioid crisis bothers me to no end,” Glenn said. “It’s all part of the mental health levy.”